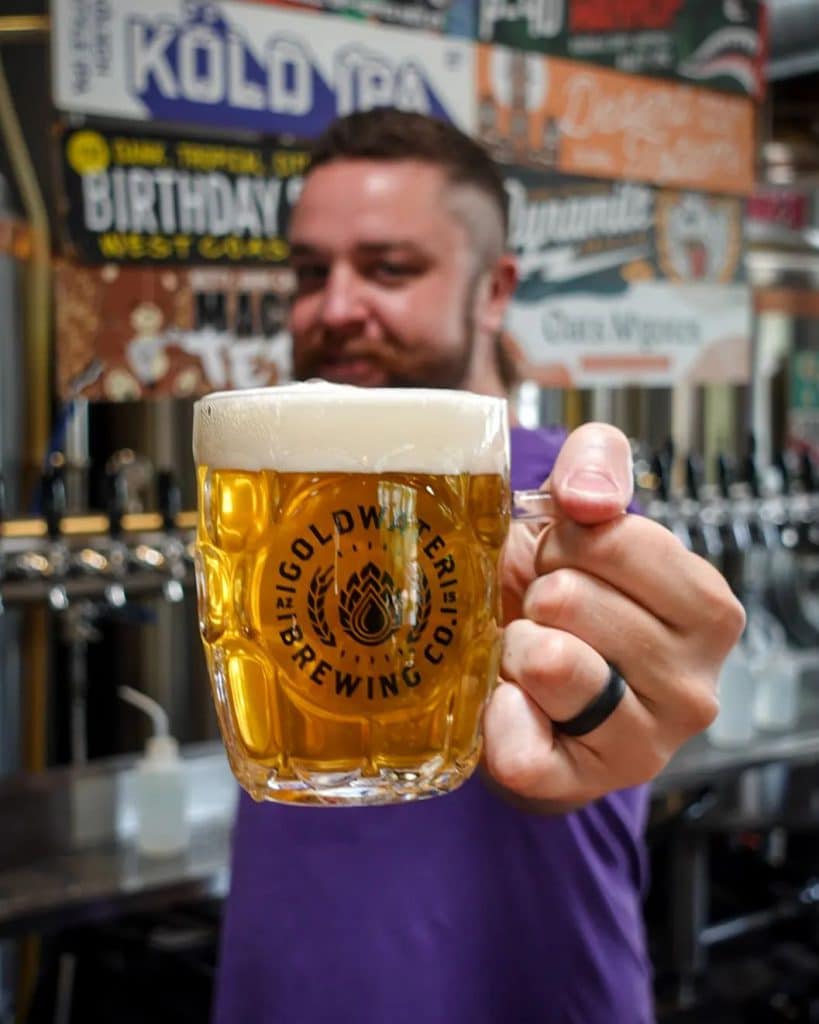 The Must-Drink-At Breweries in Phoenix, AZ

With over 100 breweries in Arizona, it’s no surprise that the state’s largest metropolitan center is home to many of them. Breweries in the Phoenix area have put out an impressive number of award-winning and nationally recognized craft beers in recent years, really putting the area on the map.

When planning a visit to Phoenix it might be difficult to narrow down the list of great breweries to see, however, you really can’t go wrong no matter where you choose to visit. When it comes to hot, desert temps, the best way to cool down is with a cold, locally brewed craft beer.

Lucky for you, many of these breweries are within walking distance from our vacation rental homes in Phoenix and in Scottsdale. That means having a beer or two just got a lot more convenient! 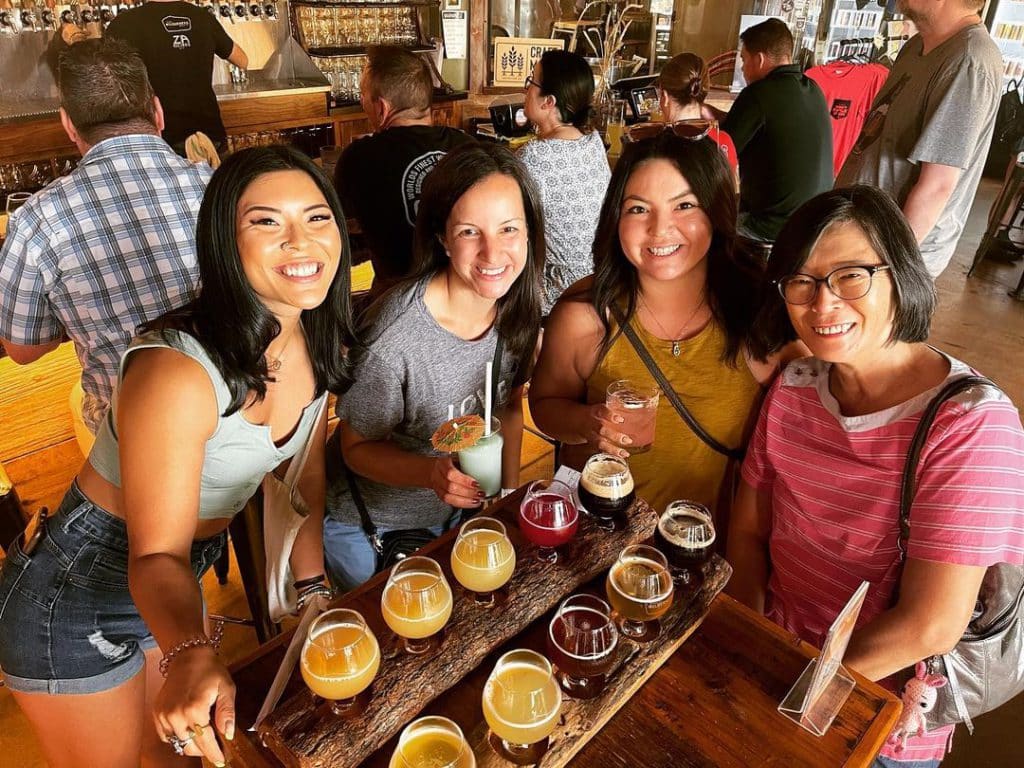 Arizona Wilderness Brewing celebrates Arizona-grown ingredients and works to bolster the state’s water supply through carefully chosen grains and hops. This craft brewery is one of the most awarded breweries in the state, largely thanks to their dedication to creating high-quality beers with techniques like barrel aging, spontaneous fermentation, and the blending of beer styles. Owners & brewers Patrick Ware and Jonathan Buford are especially known for making unique and creative brews using a variety of locally sourced fruits, vegetables, nuts, tea, coffee, spices, and anything else they get their hands on.

With locations in both Gilbert and downtown Phoenix offering a different scratch-made menu at each, there’s a perfect food and beer pairing for every taste palate. Try out their famous duck fat fries and the Refuge- their flagship IPA for a true Arizona experience. 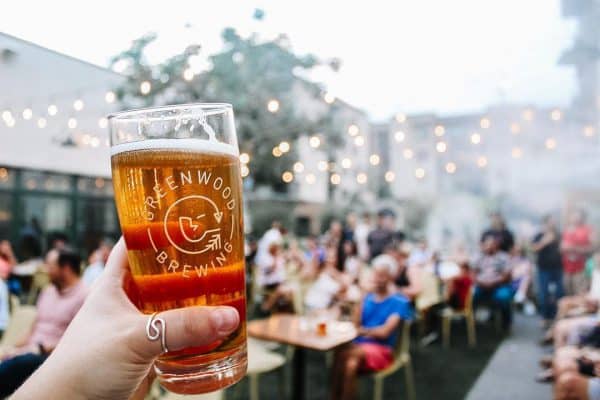 Owned and operated by women, this modern brewery strives to instill confidence, empowerment, and inclusivity in everyone who enters their establishment. Because women are largely marginalized in most aspects of the beer and brewing scene, Greenwood Brewing aims to break down these barriers by encouraging open and honest conversations, with their fantastic beers as a central bonding point. Their dog-friendly patio is the perfect setting to put their slogan into practice: the Power of the Purposeful Pint. The owners and staff of Greenwood encourage visitors to grab a beer, pull up a chair, and join in on some great conversations.

While there’s no restaurant on-site, visitors are encouraged to bring their own food or order in from one of the many neighboring eateries. Greenwood prides itself on making great beers for everyone to enjoy, and its approachable brews are meant to especially welcome women into the craft beer scene. 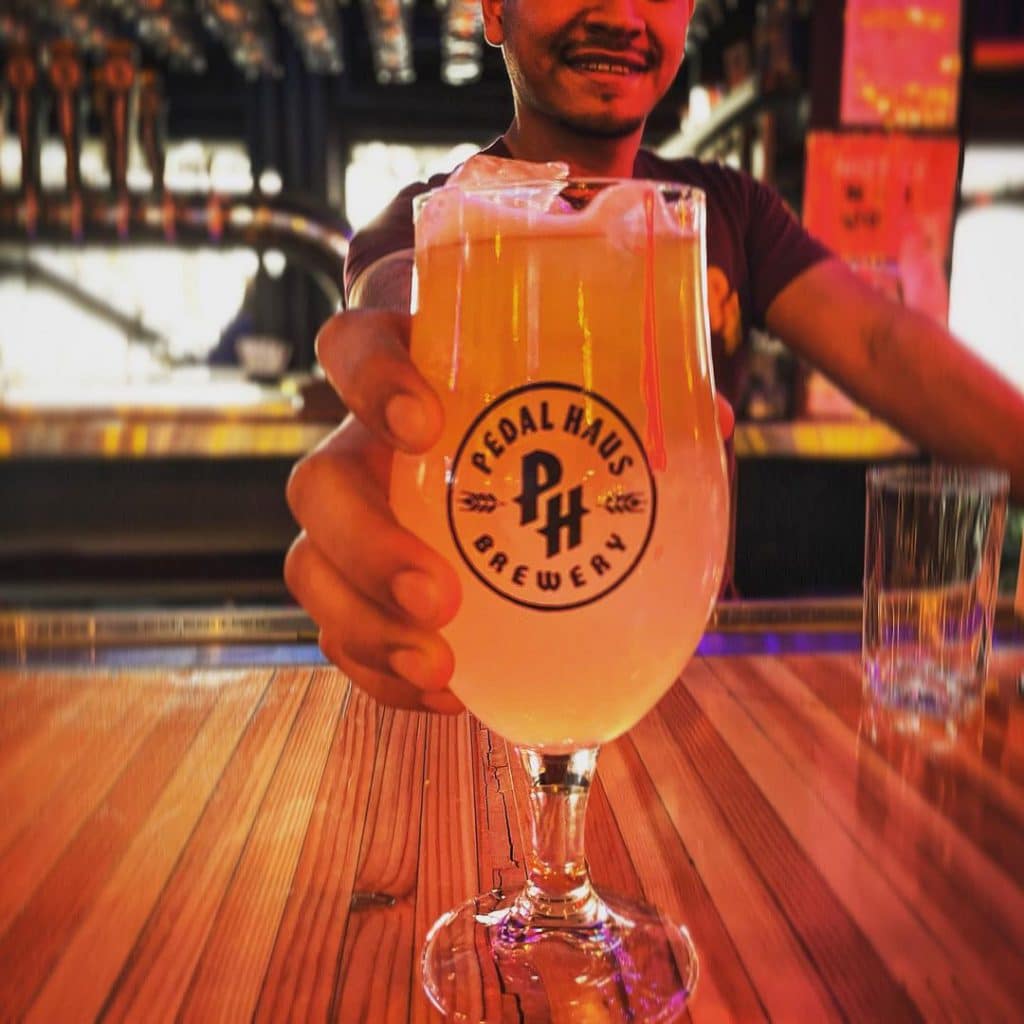 The large and welcoming patio at Pedal Haus is the perfect destination for anyone looking to enjoy an award-winning beer in a unique setting. As the name implies, cycling has a significant influence on the décor both inside and out. You can easily spend an afternoon playing patio games in the beer garden!

The highly awarded brewery is a destination in itself, with 3 different locations to choose from. Since opening 7 years ago Pedal Haus has established itself as a leader in the craft Brewing scene, having won multiple international awards, including Best Brewery in the US at the 2019 Copa Cerveza de Americas. With extensive gluten-free and vegan menus to accompany their more traditional pub fare menu, Pedal Haus aims to appeal to a wide variety of guests. 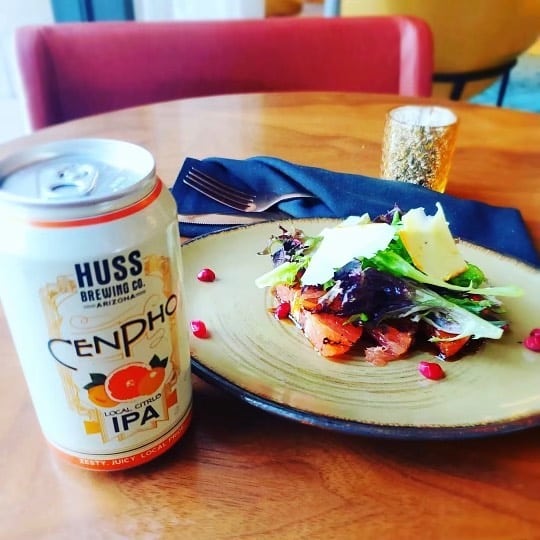 This family-owned brewery is the third largest in Arizona with a team of 24 brewers working together to create the best true-to-style craft beers. Owners Jeff and Leah Huss have a combined 30 years in the brewing industry, giving them a great knowledge base for crafting some seriously tasty brews. Their beers are available in stores all across Arizona and in 3 Phoenix area taprooms, so it shouldn’t be hard to find a beer you love. For a truly local taste try out the Papago Orange Blossom wheat ale or the Scottsdale Blonde, a tasty German-style Kolsch!

When choosing which Huss Brewing location to visit, you’ll want to plan ahead in terms of what you’d like to eat. The Downtown menu has a full chef-created menu featuring a modern blend of American eats, traditional brew pub nibbles, and Midwest favorites, highlighting local ingredients. The uptown Phoenix taproom offers a unique selection of small bites like sausages, flatbreads, and pretzels, while the Tempe location encourages you to bring in your own food. 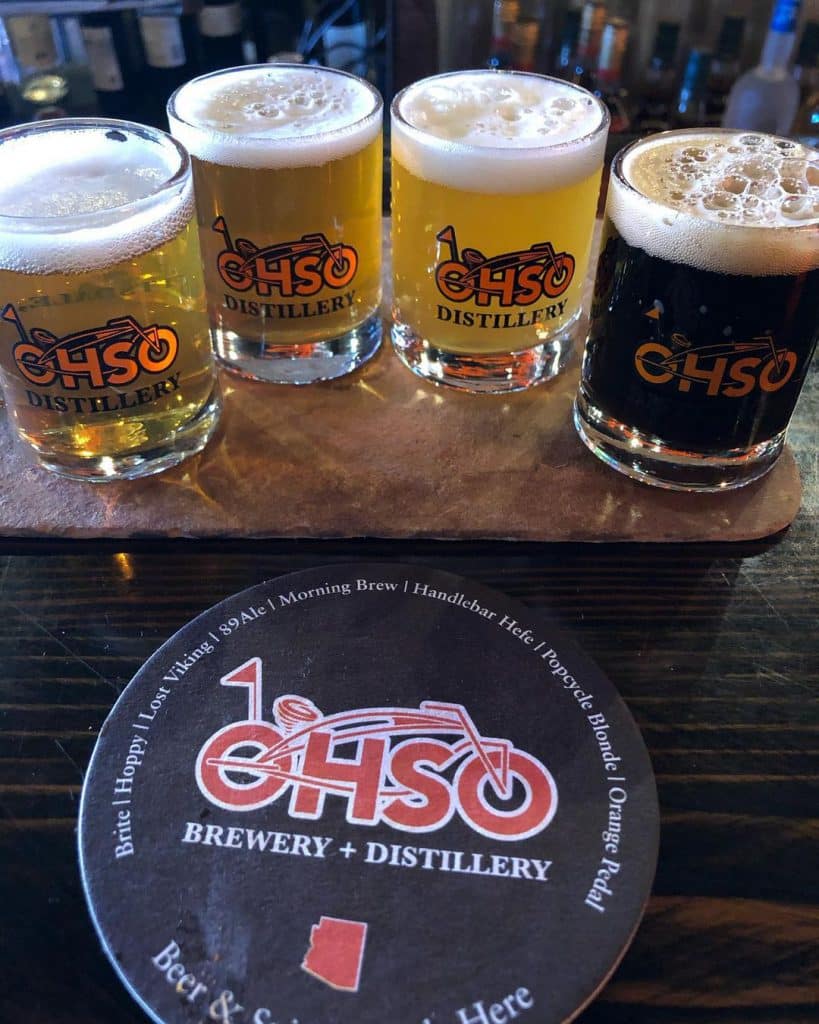 Short for Outrageous Homebrewer’s Social Outpost, this brewery prides itself on being the perfect place for a chill, relaxing pint. They welcome dogs, non-beer drinkers, and foodies alike, making them a top destination for pretty much anyone spending time in the Phoenix area. With several locations throughout Phoenix and a craft distillery on-site, it’s a natural choice for an evening out.

If you’re in town for the weekend, brunch at OHSO Brewery is a must-try! We recommend the Fruity Pebbles French Toast and the brisket fries. They also have a great gluten-free and vegan menu, as well! 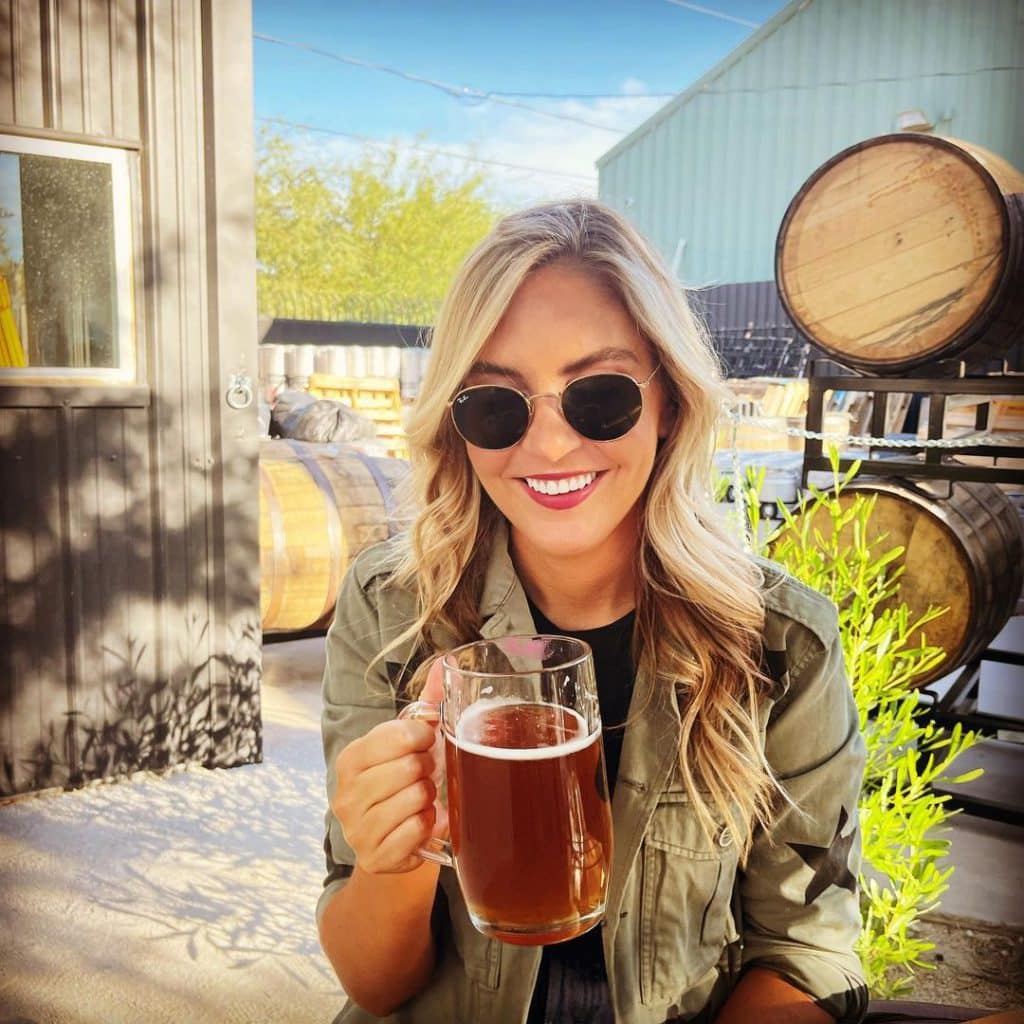 One of the newest breweries in the Phoenix craft beer scene, Wren House is also one of the most unique to experience. Located in a 1930’s bungalow, the taproom at Wren House is worth a visit, even if you only have time for a quick pint. The clean and modern space is the perfect setting to try out one of their exclusive brews without feeling like you’re in a typical taproom.

While they do some brewing in the backyard guest house and garage on site, many of their beers are now produced at their production facility in Prescott, including gold medal-winning Spellbinder IPA which beat out 376 other hazy IPAs at the 2020 Great American Beer Festival.

Although the Wren House Brewing Company doesn’t provide food on site, they do encourage you to bring in your own to both the Green Gables location, or the weekends-only outdoor Biergarten at their new production facility

This brewery has its beginnings quite far from Phoenix, however, they have since opened a second location in the city, earning their way onto this list. While you won’t get to actually experience ‘the town too tough to die’, you will get to try out their top-notch selection of IPAs, DIPAs, triple IPAs, and various special releases as well as their fruited sours if you want to lighten things up a bit.

Considered one of Arizona’s best small-town breweries, the move to Phoenix has allowed Tombstone Brewing to expand the styles they brew, and add a scratch-made food menu to their brewhouse experience. 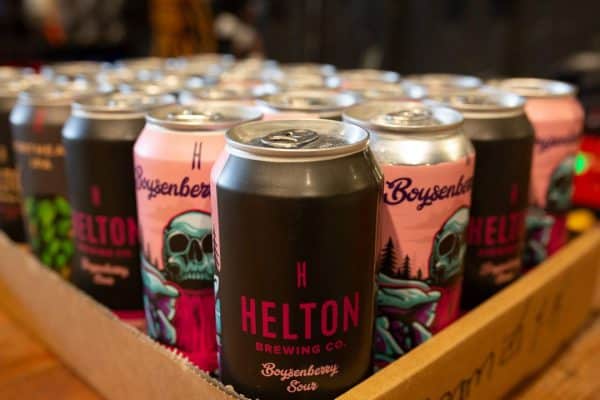 Known for his dedication to the art of a classically brewed craft beer, owner, head brewer, and Certified Cicerone Brian Helton has been perfecting the craft for decades. In a world where everyone seems to be competing to create the most unique and unusual beer flavors, visitors will appreciate his no-fluff approach to classics like the Scottish Ale, Pilsner, Milk Stout and West Coast IPA. Don’t let this fool you though- he is no stranger to innovation. Brian’s boysenberry sour has quickly grown to be one of the most recognizable beers in Phoenix. 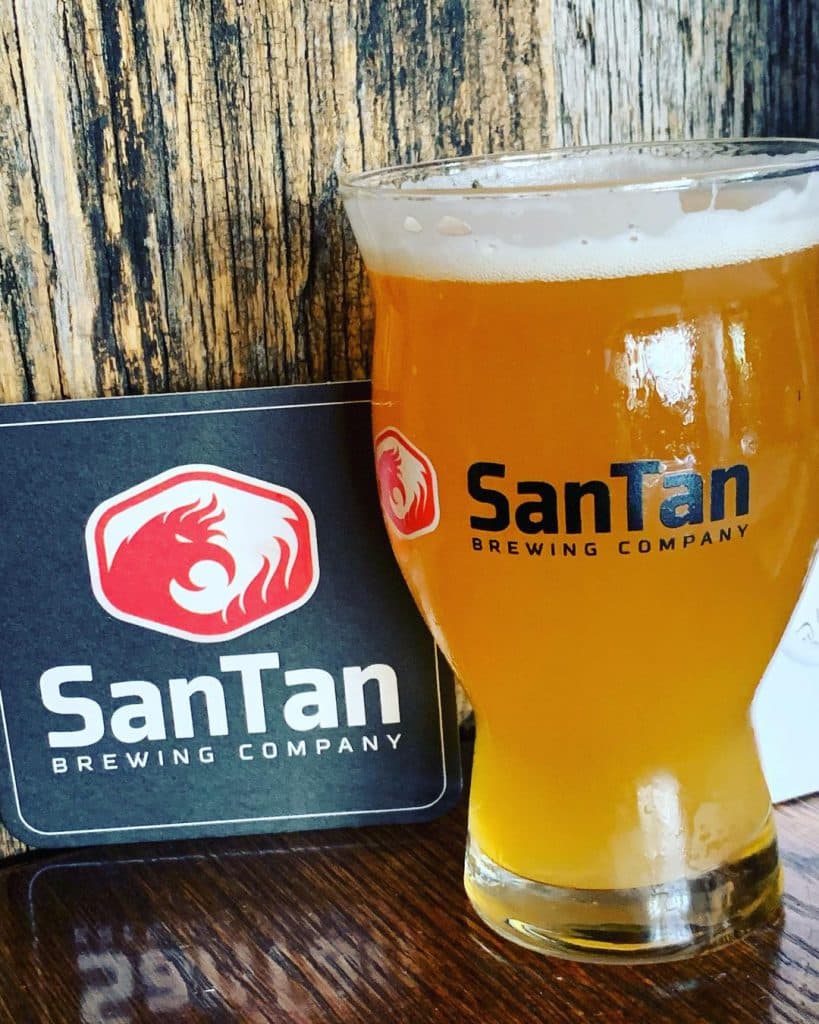 Offering the largest combined brewery & distillery tour in Arizona, SanTan Brewing is the perfect destination for an afternoon experience. They opened over 15 years ago as a neighborhood pub in downtown Chandler but have since grown to be one of the biggest brewers in the state.

Whether you’re in the mood for a great beer, a refreshing seltzer, or a tasty craft cocktail, SanTan has got it. The food menu also has something for everyone with pub classics like pizzas, burgers, tacos, wings, and more. 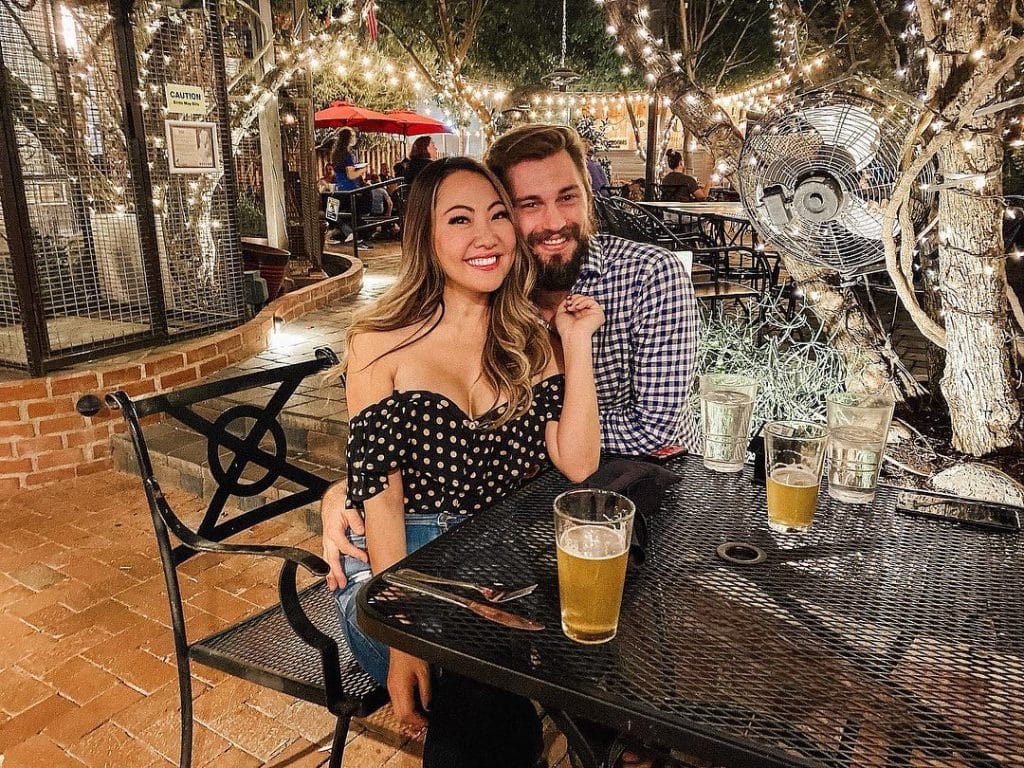 One of the most truly unique dining experiences in Phoenix- and perhaps anywhere- can be found at Perch Brewing in historic downtown Chandler. Part brewery and part aviary, you’ll get to share your space with 50 tropical rescue birds in this brewpub. With a luscious garden patio and a rooftop bar with a panoramic view, Perch offers 30 taps pouring both their own delicious brews as well as some rotating guests.

The menu at The Perch Brewery features a variety of pub fare with both Mexican and Italian influences, making it a must-try during your visit to Phoenix. Their specials menu also centers on using beer as an ingredient in each dish! 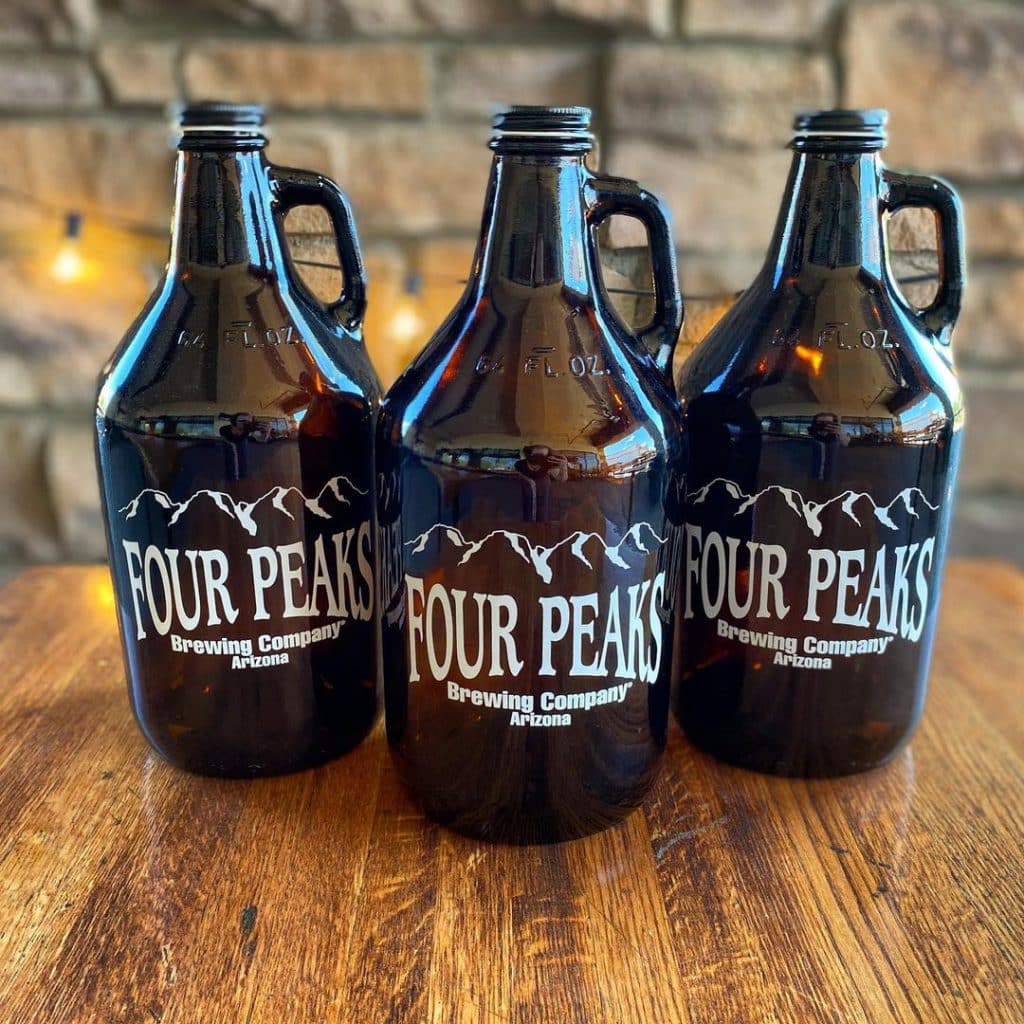 The most well-known of Arizona’s breweries, Four Peaks is named after the iconic mountain scene northeast of Phoenix. Their most popular beer is the Kilt Lifter Scottish Ale which has earned the title of the #1 beer in Arizona since it first came out of the tanks in 1996. A somewhat uncommon brew in recent years, the Scottish ale is one of several historic styles that the brewers at Four Peaks aim to honor.

Located in a 130-year-old former creamery and ice factory, the Four Peaks location in Tempe has been a popular meeting place for students, athletes, sports fans, and locals for 25 years, so it absolutely deserves a visit. If you visit during October, you may be able to catch their annual Oktoberfest which has grown to be one of Tempe’s largest events.

With 2 locations in the Phoenix area, you’ll get to enjoy a different food menu at each. The flagship location on 8th Street features a solid menu of brewpub favorites while the airport location offers a great cocktail menu and a pub menu that has a bit of something for everyone. 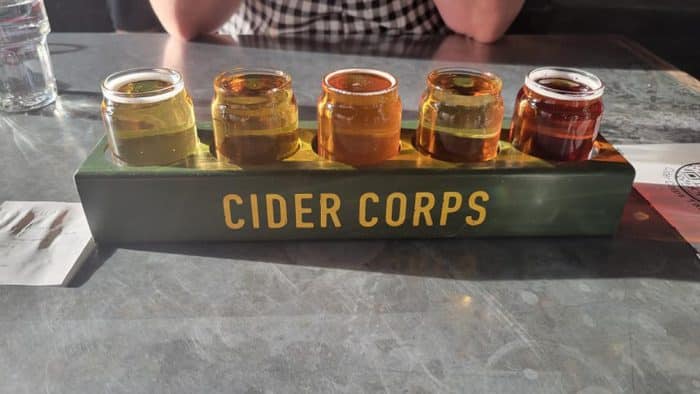 Although not technically a brewery, Cider Corps Cidery deserves a mention when discussing breweries to visit in Phoenix. The ingredients are quite different but brewing cider is an art that often earns its place in many discussions about craft beer. The variety of cider available on tap at this veteran-owned cidery is impressive, with flavors like black tea, coffee, cassia bark, dark cherry, prickly pear, and even hops making their mark. Give their cider slushies a try for something truly unique! 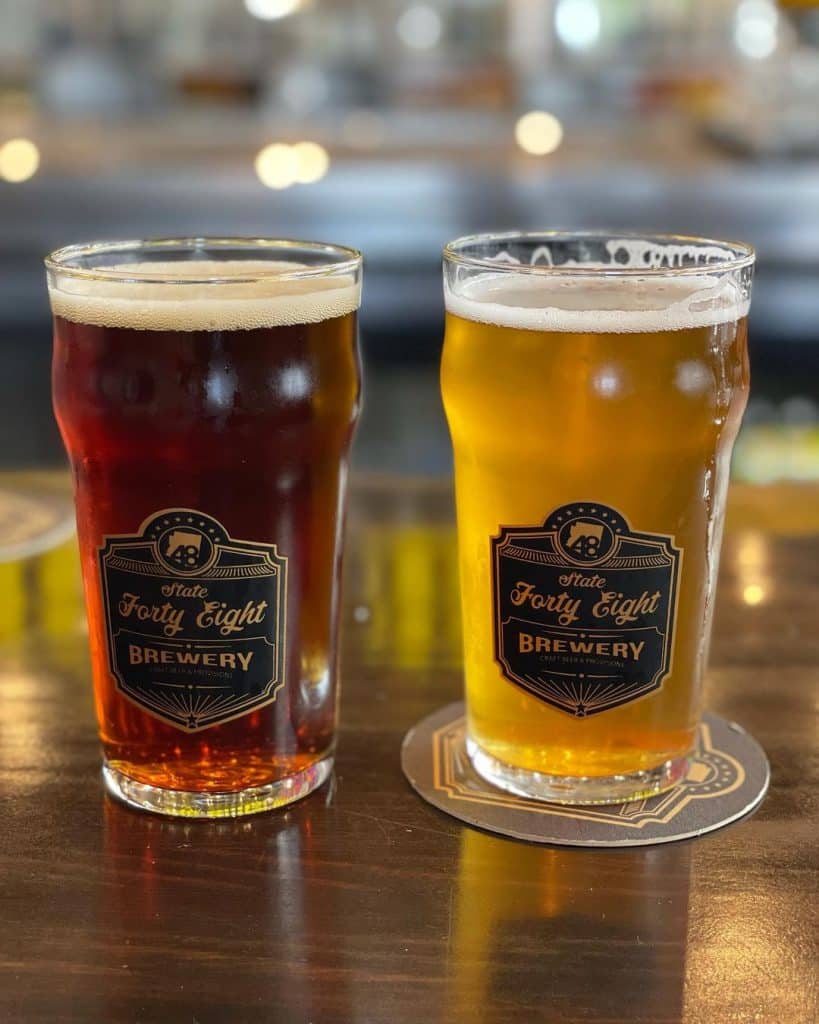 Named for when Arizona officially became a state, State 48 brewing has experienced very rapid growth since it opened in 2016. In the 6 years since they’ve opened 5 more locations, each with an entirely unique vibe. From bowling alleys to backyard games, each location offers such an original experience that you can’t go wrong visiting more than one.

Family-owned and operated in Old Town Scottsdale, this brewery has been the culmination of a lifetime of homebrewing for two brothers, their dad, and a close family friend. One of the main highlights of visiting Goldwater is their underground bunker- aptly named the gold mine- where you can enjoy a pint surrounded by barrels of aging beer. 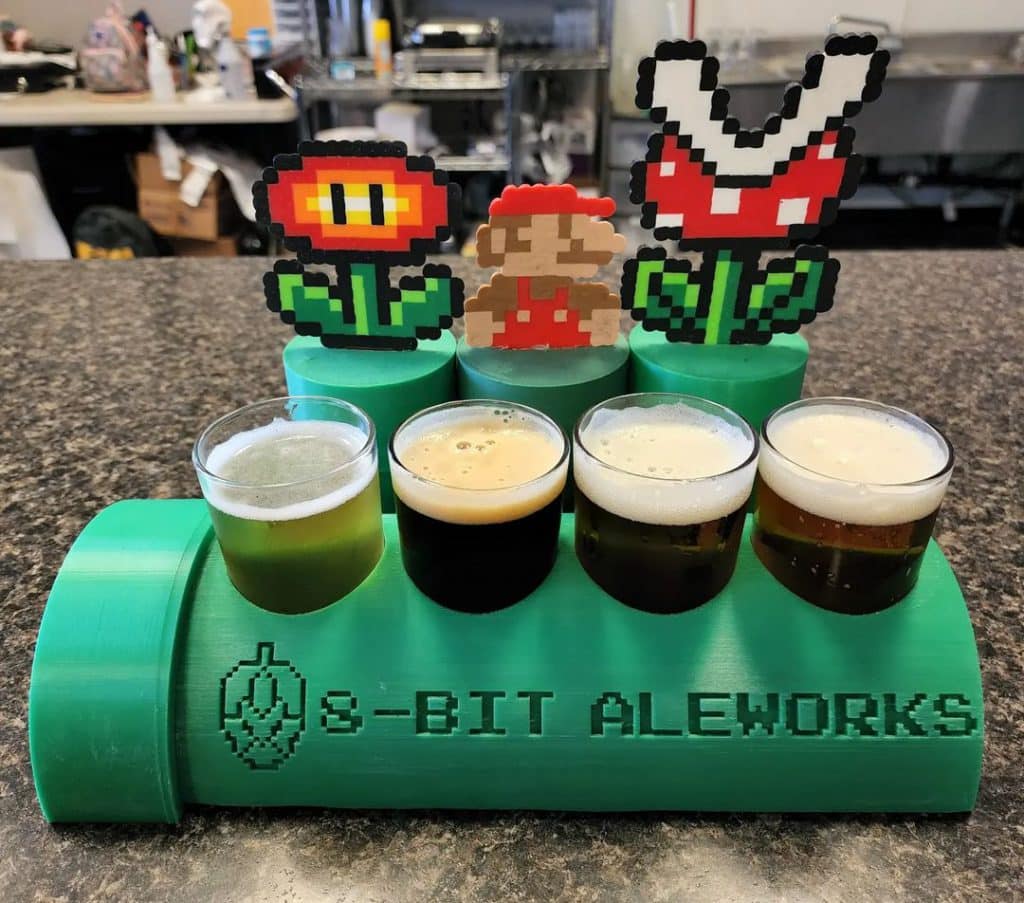 Themed around video games and the pop culture that surrounds them, 8-Bit Aleworks opened in 2015 and has been working hard ever since to create small batch beers that deliver with big flavor. With various video game systems, arcade games, and tabletop games for guests to enjoy, this is a fun brewery for an afternoon with friends.